The snow comes across the sky

one that perhaps you have smashed

against your best friend's head.

The flakes, too, are reckless.

They see me through my window.

They flock against the glass

to get a better look at me.

They show me their six identical corners.

I show them my two unique eyes.

In those moments just after twilight

A Summer’s day in the middle of Fall

At the elementary school.

Then one head light

Then more headlights in an endless growl

I am the shark that splits them

You know the kind

With moons for eyes against midnight black fur

Staring at me from the shadow

Just after twilight in the middle of Fall

I have long held the opinion that I am ruled by  six primary counter-intuitive desires.

I want to save the world.

I want to destroy the world.

I want to conquer the world.

I want to be consumed by the world.

I want to be included in the world.

I want to abandon the world.

These seem like conflicting and lonely fantasies. Though I may often be conflicted,  I am not lonely.
And I realize at any given point in time, I could remove "the world" and replace it with something a bit less lonely.
Practically anything else as unattainable as the world.

love
money
time
literature
happiness
alaska
myself
or
you
Posted by Nessa Locke at 8:35 AM 0 comments 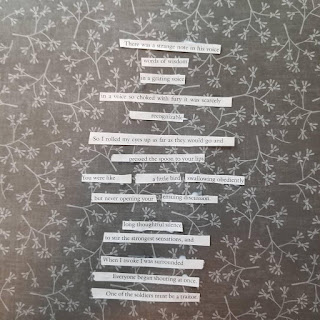 I demolished a book today.
Like a regular sadist.
I did it to get the boy interested in poetry.
We spoke of mechanics and theme and tone.
We looked for power words and mood and proper grammatical structure.
We pieced words and phrases together from the scraps of an old paperback my friend had given to me. (She didn't like it you see, but I might, if I gave it a try. And I tried.)
The boy and I clipped and snipped and rearranged the bits.
We stuck them onto new backgrounds and committed them to their new order with Elmer's.
We didn't unwrite the pages. We obliterated the pages.
And now the words belong to us.
Savages, we. 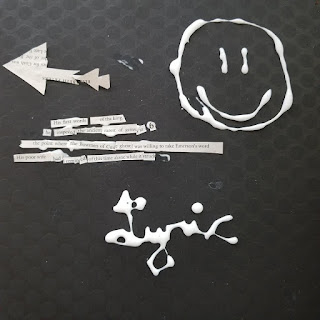 long thoughtful silence
to stir the strongest sensations, and

When I awoke, I was surrounded
Everyone began shouting at once
One of the soldiers must be a traitor.

There is a single fly darting around my house landing in peculiar places: the ivy, the entryway rug, the photo wall.

As I was stalking it, swatter in hand, trying find the perfect moment to strike, I swear I heard my dead mother whisper in my ear, "If a fly can get in here undetected, COVID-19 won't have any problem slipping in." 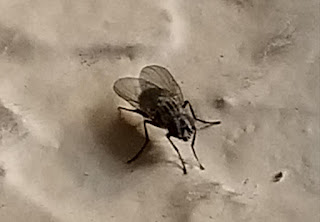 I guess they don't have the six feet rule on the astral plane.
Posted by Nessa Locke at 9:38 AM 1 comments

I Wasn't There for the Ambience

An old boss of mine once told me that a girl like me ought to be happy just to have a job--a girl with four kids, no husband, and no degree. He listed those things specifically.

I was asking him for a raise, and I deserved one. I did not get one.

This is the same boss who, when another female coworker of mine decided she wanted to be a firefighter, accused her of "trying to be a man" because she "wanted a man's job."

Great guy, that old boss of mine.

I bought a house, took a trip to London, got published a few times, survived my first car wreck, found new hobbies, revisited old hobbies, volunteered, made tons of friends outside my normal circle, and pretty much had the best time of my life focusing on my own growth.

All of this I did without the critical financial, moral, or emotional support of a husband.

Going through it all, I supposed it was easier to NOT have a man than it was to have one. I had more freedom to NOT do regular chores around the house. I wasn't expected to keep the house clean or do grocery shopping or any of the stupid things women complain about "having" to do all the time.

Pretty quick after I graduated, "Arturo" swooped in and scooped me up. It was a bold move. I had turned down a few men already, and I had planned to continue being single, seeing that it was working so well for me up until that point.

The funny thing about Arturo is he's a real man's man. He shows up for life, works hard for his paycheck, has muscles and stamina, works on cars, likes his privacy. Not the kind of guy I thought I'd ever be attracted to again. I was imagining I'd find a nerd like me with a couple of degrees and a passion for philosophy and art.

When he asked me out he said, "You wanna get together for coffee and talk about Shakespeare?"

We've been together for over a year now, and I have no idea where we go from here. The only thing I know is that I don't need him. I am perfectly fine on my own. And that simple fact adds value to our relationship. I don't need him around; I want him around.

And that's the kind of girl I want to be. A girl like me.

Maybe It Was Allegory

Last night I dreamed of a goldfish who lived in a glass bowl in the middle of a swimming pool. He kept jumping out of his confined bowl into the "freedom" of the pool. I spent all my time catching him barehanded and putting him back in his bowl. Each time the little fish jumped into the pool, he grew a little bigger. Naturally, this made it easier for me to spot him and catch him, but eventually, he became too big to fit back into the bowl. I sat on the edge of the pool with the little glass bowl in my hand and watched him as he became much too large to swim freely in the pool. He jumped out and told me he was going to find the ocean. By this time, he had grown so large, he was bigger than me, maybe twice as big, and I could no longer scoop him into my protective hands and put him back into the safety of his bowl or the pool. I couldn't even drag him into the ocean. A sadness grew in me for the loss of my little fish, because I knew he would not make it on his own, and I was useless to help him. I woke up wondering how to find the ocean and bring it to my little fish, and only when I was awake did I realize I could have dreamed it into happening. I could have dreamed of a secret passageway out of the pool directly into the ocean, but I forgot I was in a fantasy world. I forgot I was in control. That is the way of dreams.

Let me tell you a true story, except for the names; I'm changing those to suit my fancy and to protect the ignorant...er...I mean innoce...

Posts of the Past

Check these out. They amaze me.